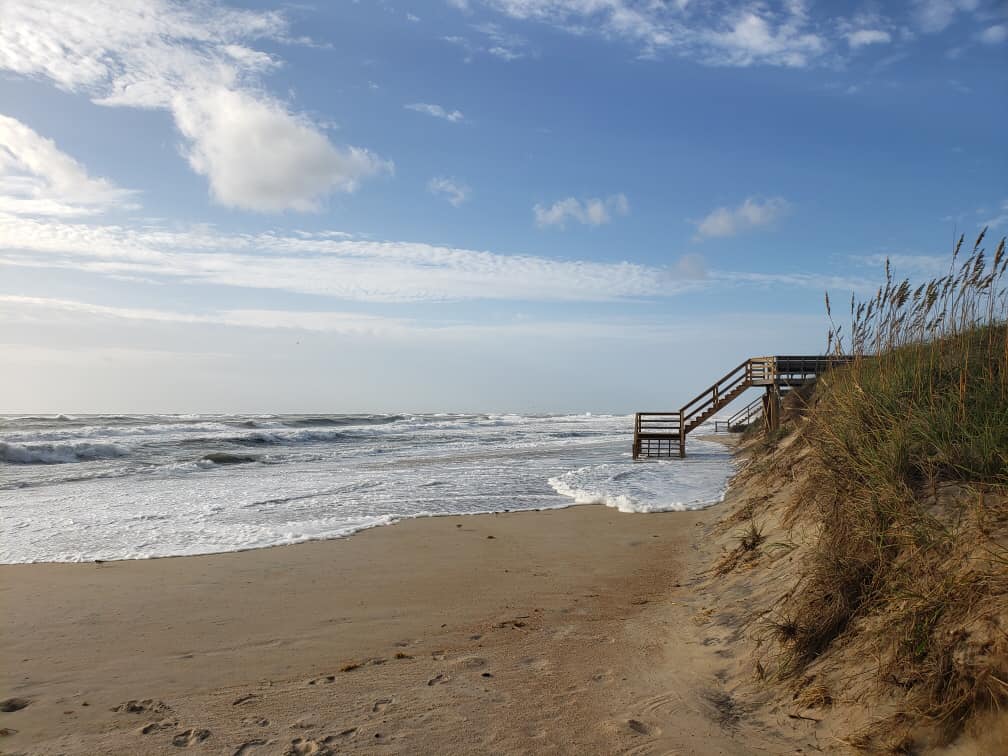 “Earlier this month, 3,700 letters were sent to property owners in Avon to share the county’s proposed plans for beach nourishment,” stated Dare County Board of Commissioners Chairman, Bob Woodard, at the start of the meeting.  “We have received 276 emails from people regarding this issue, and [there are] 45 people who have signed up to ask questions or give comments during this meeting.”

The meeting began with a brief history of beach nourishment in Dare County provided by Outten. The first beach nourishment project was proposed in the late 1980s in the town of Nags Head, with the cost of the project split 70-20-10 between the federal, state, and county governments.

“This led to the establishment of the occupancy tax,” said Outten. “The federal share never came through, and state funds fell through as a result.” A decision was eventually made for Nags Head to pay for 50% of the project costs, and for Dare County to pay for the other 50%. The ensuing beach nourishment project wrapped up in 2011, just days before Hurricane Irene hit.

“When we got [to Nags Head] after Irene, to our surprise and delight, there was no damage… and we all sighed a big sigh of relief,” said Outten.

But Hatteras Island was a different story after Irene. N.C. Highway 12 was destroyed north of Rodanthe, and residents had to utilize an emergency ferry for roughly 30 days to gain access to the island. Outten noted that when the 2017/2018 Buxton Beach Nourishment project was first floated, it was out of fear that similar and substantial damage could occur to this southern stretch of N.C. Highway 12 as well. “We were concerned that Buxton was going to be a Rodanthe [after Irene]… Our goal was to prevent the loss of Highway 12 as it had occurred in Rodanthe.”

“Though many people have seen the beach erode [in Buxton] over the years, the project was a success because it had done what it was supposed to do,” said Outten. “There was no loss of Highway 12 and it mitigated flooding in the project area. The problems we’ve had since the beach nourishment project were things we could fix in a day or so, so things could get done quickly.”

“We didn’t have any issues in Avon at that time,” he added. “Nobody imagined at that time that Avon would be anything like it is today… When you identified hotspots, you never identified Avon. In five years, that has changed dramatically.”

The rate of erosion along the beaches of Avon has accelerated dramatically in the past few years, and particularly for the southern half of the village. The sand dunes along much of the beach in the Kinnakeet Shores area and beyond have been washed away, allowing the ocean to flood N.C. Highway 12 regularly, and make the highway impassable.

In the past several years, this has occurred during hurricanes and nor’easters, but also during offshore storms, extreme high tides, and other less-severe weather events.

Outten then outlined the specs of the project, as well as the proposed tax increase for Avon residents.

“A study was completed in 2020 and they recommended a project that would cost around $11-14 million dollars,” he said. “It will create a beach that is 100-125 feet wide, and by the next time we have to do maintenance [in approximately five years], it will be about 75 feet wide.”

The proposed project will place over 1 million cubic yards of sand along the beaches of Avon, likely from an offshore borrow pit. The nourished shoreline will extend from about 3,000 feet north of the Avon Pier at Due East Road to the southern boundary of Avon, covering approximately 2.5 miles of oceanfront. If approved, the project is slated to begin in the spring of 2022, and will take an estimated 90 days to complete.

Per the project proposal, Avon property owners will pay approximately 50% of the beach nourishment project cost, and Dare County will pay the other 50% out of the Beach Nourishment Fund, which is funded by the county’s occupancy tax.

Dare County proposes to tax the properties on the oceanside of N.C. Highway 12 from Due East Road to the southern boundary of Avon at a higher rate, as this stretch of shoreline is adjacent to the proposed beach nourishment project, and will therefore receive the greatest benefit, per Outten. The rest of the properties in Avon will also be taxed, but at a lower rate.

During the public comment period following Outten’s presentation, the overwhelming comments from attendees were questions about how this tax would be distributed.

While roughly half of the commenters stated that the proposed taxes should be adjusted, there was a big discrepancy as to who should pay more, and who should pay less.

Several commenters stated that all Avon property owners should be taxed equally, while others believed that oceanfront properties, or properties in a specific and/or highly-eroded area of Avon, should pay a larger percentage than proposed.

Other comments included the proposal of a county-wide or island-wide tax for the project, a larger tax for residents versus non-resident homeowners, a larger tax for vacation rental homes, an adjustment to the taxes to include affected properties on the western side of N.C. Highway 12, a lesser or no tax for properties in northern Avon, and a greater tax for businesses versus residences.

Essentially, many commenters disagreed with the current two tiers of proposed taxes, but for a myriad of different reasons. Outten stated that the issue of broadening the proposed tax service district, and including villages outside of Avon – or the county as a whole – is that as future beach nourishment projects are conducted throughout the county, all property owners would have to foot the bill, regardless of whether they directly benefitted from a future project. “I’m not sure that would be palatable in the communities, because we have people right now who don’t want to pay the [beach nourishment] taxes we already have,” he said.

As for making the proposed tax map more detailed, and creating additional or different tax rates based on location, etc., Outten said that an effort to “split hairs” would become problematic.

“Our goal is to keep this tax as low as possible. We felt like this was a fair tax,” he said. “If we further divide the project, the next question is, ‘if you get less erosion than another neighborhood or street, [should you pay less?’]” It would become cumbersome.”

“We can’t draw this out on a lot by lot basis. And if you don’t have a problem with erosion today, you’re going to have a problem soon… We have done our best to make this fair.”

Several commenters also asked about alternative options to beach nourishment, which could cost less or be more effective for the long term. Outten noted in the presentation that in 2003, the N.C. General Assembly banned any new hard structures on the beaches, such as seawalls and terminal groins, and Geotubes and offshore reefs were also not approved for use in North Carolina, making beach nourishment “the only available option.”

Other questions focused on ramping up efforts to secure federal and/or state funding, (especially considering that a new administration is now in place), or using some of the Beach Nourishment Fund to lobby for additional grants and funding, which would take the burden of paying for half of the project costs off of Avon property owners.

Outten stated that NCDOT only assists in cases of emergencies, (such as the destruction of N.C. Highway 12 after Irene), and that the county had reached out to numerous administrations since the first beach nourishment proposal in the late 1980s and 1990s. “We worked for more than a year trying to figure out how to pay for [the Avon] project… there are no federal or state funds available. None… we’ve been to every source of funds [possible.]”

He also noted – both in responses to questions about future lobbying and in the presentation itself – that expediency was key in completing the project. “We don’t want to sit on our hands and do nothing while we wait for this administration to [consider it],” he said. “It’s not a question of ‘if,’ it’s a question of ‘when,’ and right now is as cheap as it’s going to get.”

“The cost for not doing it seems to be greater than the cost for doing it, and something needs to be done.”

There were also concerns about how long the tax would be in place, and how it may increase or decrease over the years, which are both unknown. Per Outten, the tax will be in place indefinitely, as beach nourishment is not a one-time project, and maintenance and re-nourishment must be performed approximately every five years.

The majority of public comments following the presentation were questions, although there were also several positive statements and several negative statements regarding the overall proposal. A video from the meeting will be available via the county in the near future.

The board will then decide whether to proceed with the project, and if so, what the final tax rate will be. If they decide to proceed, another public hearing will be held, as required by statue, and another letter will be mailed to Avon property owners with the new 25 cent / 5 cent tax model.

For more information on the proposed project, see the Avon Beach Nourishment FAQs or visit the Dare County website at https://www.darenc.com/government/avon-beach-nourishment.